An Excerpt from Incompetent Gods 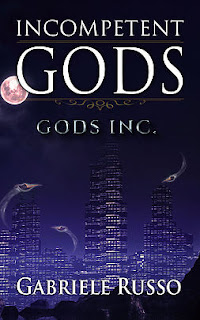 
In the Summer Palace near Karta, the two robed figures stood on the rim of the glowing abyss.


“Well, that worked… not at all. What did you do, you… your Highness?” asked Goblin, with what he considered admirable restraint.


Three times, the king had shouted Ba’al’s summons. Three times, nothing but silence had answered. They couldn’t try for a fourth without a new goat, and gods knew it smelled bad enough in here.


It wasn’t a BIG surprise; His Lameness King Japhet was renowned for failing at most things. This being said, he did look the part. He was, to put it simply, majestic. Exceptionally fit, with ebony skin and a great white smile, he towered over everyone. He also had big broad shoulders, ideal for taking the blame if things went wrong.


Right now, His Uselessness was leaning on the altar and pouting.


“I did everything you told me to. It’s your fault it didn’t work. Why didn’t you stay with me instead of hiding in the next room?”


“I told you, Your Worthiness,” said Goblin with all the patience he could muster. “If you want the titan to be YOUR servant, you must conjure him alone.”


That was a lie: a summoned divinity only ever obeyed his invoker, but Goblin preferred not to be seen by Ba’al. Not to mention that if there was a fault in the summons, if he had missed the aforementioned dot for example, divinities could get quite rude about it.


Alone, Goblin would have punched the wall. They had to postpone everything. There were many possible reasons for tonight’s failure, but none could be remedied now. Prince Asset would arrive soon and he could not find out about the plan.


Goblin glared at the King, thought for a second about replacing one goat with another, different kind of goat, then got a hold of himself. Even if His Odiousness was not strictly necessary, Goblin didn’t enjoy wearing KICK ME signs. He preferred to work from the shadows. He pulled the hidden lever and the two panels slid into place, closing the abyss.


“It’s all right, Your Industriousness.” Goblin bowed obsequiously. “Go and rest, I’ll clean up in here and find out why the summons didn’t work.”


“But Goblin!” The king was petulant. “I was supposed to be the world’s most powerful ruler in less than a week. We need my brother, he’s good with the gods…”


“And the other rulers,” said Goblin. “Do you really trust his lack of ambition? Especially when you’ll have so much power?”


The king frowned in puzzlement before stomping his foot. “Oh, Poo! Just hurry it up, will you! I want the world; I need new concubines, and fast!”


His Pompousness left in a huff, in the timeless manner of dim-witted kings, and slammed the door, leaving a bemused Goblin staring at it.


He shook his head. He had chosen Japhet because of his stupidity and childish behavior. Now was not the moment to be surprised by the extent of both.