How do gods blaspheme?

"When you hit your thumb with an eight-pound hammer, it's nice to be able to blaspheme. It takes a very special and strong-minded kind of atheist to jump up and down with their hand clasped under their other armpit and shout, "Oh, random-fluctuations-in-the-space-time-continuum!" or "Aaargh, primitive-and-outmoded-concept on a crutch!"
Terry Pratchett - Men at Arms

As a reader, there’s nothing that brings me as much pleasure as discovering a new way of cursing. Disclaimer: this might be a French-Canadian thing. People in Québec, oppressed by the Catholic clergy until the Quiet Revolution in the 1960s, have developed a unique way of venting their anger: almost every sacrament (even the word sacrement), every implement of the mass, has become an expletive – Baptème! (my father’s favorite – baptism), Tabarnak! (Tabernacle), Ostie! (Host), and so on, which you can link in an endless chain with a de: Tabarnak de caliss d’ostie de ciboire de marde!
If not innate, my affection for swearing started at a very young age (before I even knew what it was, and long before anyone would tell me the words), with the discovery of comic books, which I read without knowing how to read. Most of these were, if not aimed at children, then at least kid-friendly, so the authors had to convey the anger and frustration inherent to a satisfying curse fest in creative ways.

There was the good old number’s-uppercase-line, but the best added to it with symbols and drawings – and the character’s expression was often quite telling, as in this lovely one from Greg’s Achille Talon.


In the next one from Astérix et les Goths, Goscinny and Uderzo pushed the irony a little further by translating the picturesque oaths. 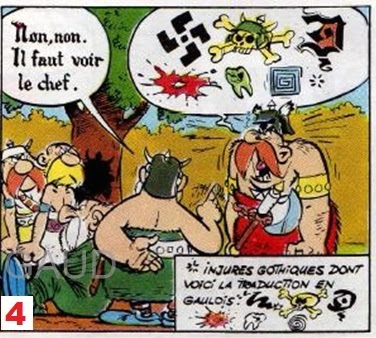 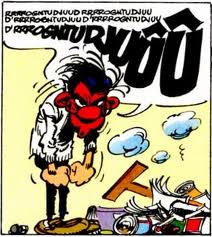 Some found more original ways. In Gaston Lagaffe, Franquin would write out the sounds – meaningless on paper, they would regain their full sense once said aloud. And you gotta love the red face.
I grew up, sorely feeling the lack of older siblings (those treasure troves of the best profanities). I had two older brothers, but they were well into adulthood, and they couldn’t be persuaded to teach bad language to their little sister. On the other hand, they taught me that the words themselves don’t matter that much: with the right intonation, you can make up your own. 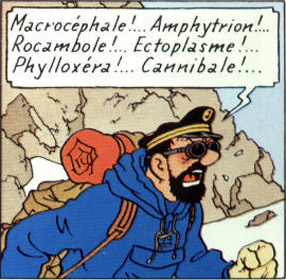 I remember my brother being cut by a bad driver when I was nine and him thundering “Cornichon à Roulettes” (pickle on wheels). My friend and I laughed for hours. And just like that, I saw the genius in Capitaine Haddock’s strings of literate insults (Tintin by Hergé). Here – Bighead, Cukold, a sort of inedible leek, Slime, Pest that attacks grapevines, and Cannibal.


When I reached my teens, I was shipped to an English speaking boarding school in Southern Québec (possibly because my language was deemed unfit by the nuns at my Catholic school). Lo and behold! A fresh new world of profanities opened itself to me. Sadly, the school library was poor in such things and my swearing vocabulary did not expand much further than what I could catch on American television.
Upon reaching adulthood, the singing ribaldries of 90s French comic cinema attracted me to the other side of the pond. Perhaps unsurprisingly, French cursing is mostly about sex, but whereas it feels puritanical in the US, the French revel in it and are not the least bit apologetic. What’s more, many French oaths also have a mundane meaning. And so a Frenchman can yell out Bordel! then look you straight in the eyes and say that no, he didn’t say whorehouse, he was just commenting on the mess.
Three years later, an incidental bachelor’s degree in my pocket, I was swearing like a native and ready to go back home, but my Great Epiphany was laying in wait. Stuck in a dreary London hotel, I discovered British humor. The sky opened up, the sun came out as I finally heard real British cursing. Colorful, irreverent, bouncy, fun to say… I fell in love instantly. It might even be the main reason I write in English instead of French.
How a person swears, the words he chooses to do it with, is revealing of his personality, but it’s also revealing at a cultural level. For a writer, it can be valuable tool that hints at a character’s nationality, and develops his personality.
My Gods Inc. series is, you guessed it, about gods. I wasn’t far into writing Incompetent Gods that the question presented itself: how in gods’ names would gods blaspheme?
But I’m not telling. You’ll just have to read the books to find out. 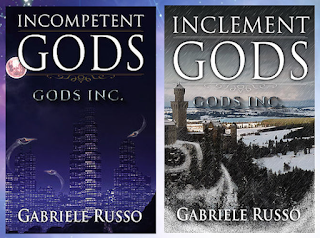